One of my three 3TB Seagates I purchased sometime between Jan. & May 2013 just started throwing SMART errors at me and dragging my system to a crawl.

The Seagate RMA process, so far, seems really good & very easy. I just put in the serial number into their website and registered for the $9.95 advanced RMA service where they ship you the replacement within 1-2 days using 2 day delivery and provide you with a label for shipping it back.

Hope it works...only crappy part is they require a signature. Thank goodness for DrivePool! All my data was duplicated on the other two disks.

Unfortunately, now any PC I connect it to won't finish loading Windows (well at least after about a 5-10min wait at which time I give up). So I can't even format it.
C

Format it from a usb/SATA adapter once Windows is booted. You have one of those, don't you?

CougTek said:
Format it from a usb/SATA adapter once Windows is booted. You have one of those, don't you?
Click to expand...

Good idea. I think I do. Thanks!

Stuck it in a Thermaltake BlackX enclosure. Took a while to initialize the 3TB drive but it was finally detected as a 746GB drive. Not sure if the controller in the thing supports 3TB drives. The package says 2TB drives are supported. Unable to format it.

I had one of these Seagate 3TB drives die several months back. I don't know if it's the same make/model as yours. I had bought 4 of them when amazon was having a great sale. I was lazy and forgot to RMA it...I should go do that before the warranty runs out.


You may have seen this study from BackBlaze posted in other threads here. Merc's hate for WD has got nothing on what BackBlaze deals with in Seagate RMA's... They have almost a 10% annual failure rate on the 3TB drives. 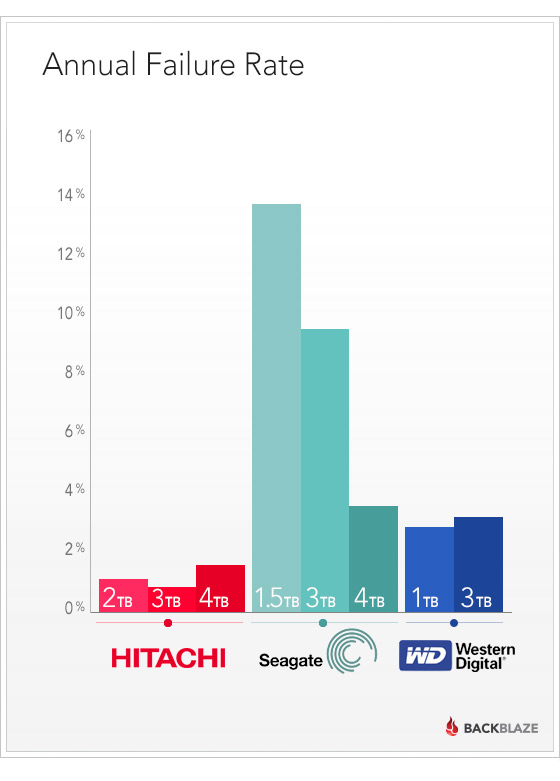 Location
I am omnipresent

I have a 3TB Seagate drop from a disk array approximately quarterly. Sometimes they're actually bad and sometimes I can't find anything wrong with them, but I haven't lost even one 4TB drive and many of those are coming up on their second birthday. I only lost one 1.5TB Seagate drive, and I have a crap ton of those, too. I have not yet had to do an RMA on a Hitachi/HGST drive larger than 1TB, but in the volumne that I buy drives, I'm not going to go out of my way to pay a 20% price premium to get them, either.

I didn't start losing Samsung 103UJs until this year. Those drives were six or seven years old and they're mostly being used for non-critical things like backing up personal workstations.

I have a total of three 3TB WD drives. Two "Red" and one "Black." The last batch of 2TB WD Black drives I had to buy had two failures out of five in six months.

I have 30 3TB drives spinning right now, with five spares on hand, and I have 24 4TB drives with two spares on hand. Almost all my data is configured in 5-drive RAID5 arrays with a SnapRAID parity disk configured per array as well.

I just retired a 6 year old WD 640gb drive that was working fine. Wishing I didn't get my Brother in law a 2tb Seagate last week now. At least I have him backup to me via Crashplan.

My one and only drive to die was the Caviar Blue that died back in April. Everything else I've got has been working fine for years on end, except for the 500GB that's in my laptop of course.

I realize that you're all talking about server arrays that probably get the crap kicked out of them daily by constant usage over the network, but what's stopping those drives from working beyond the 1-2 year mark? Are they just not making them to be as reliable as they used to?

Location
I am omnipresent

As a general rule, you'll see a roughly 5% failure rate on drives within their warranty period. When you have dozens of drives, you're more likely to see a drive fail. The 3TB Seagates definitely have more problems than other models, something that I can't really correlate to a particular use pattern. I also had a lot of problems with 2TB drives from nearly all manufacturers and after a lifetime of failure as consistent as the sunrise I still think WD makes hard drives that are best suited for construction material.

I have a suspicion that the 6TB and 8TB models coming out now are also going to be unreliable, something that will be masked by the fact that most consumers will buy them in external enclosures that can take the blame.

Were I to generalize, most of us would probably say we had measurably fewer problems with Samsung and/or Hitachi drives and of course those are the two companies that aren't making drives any more.

I thought Hitachi was still in the hard drive business. Who all is still doing that? I know Seagate and WD still make hard drives, is that it?
C

HGST has been bought by Western Digital and a part of their manufacturing has been sold to Toshiba IIRC. Samsung's hard drives business has been bought by Seagate. HGST still is the most reliable brand you can buy nowadays, according to my own experience and bits I read on the Net.

The Seagate replacement arrived yesterday in good shape. Arrived with a pre-paid UPS label in the box to send the old one back, and I re-used their packaging.

At least the RMA process works well. I guess they get a lot of practice.

What is this storage?

What Cougtek said and handruin presented. Learned long ago not to rely on seagate. Been buying mostly HGST since they bought IBM's drive business, though I do have a few WD Raptor drives, and a Toshiba branded hgst drive. Not that this is helpful to the op. Hope your new drive proves more reliable than the failed drive, Clocker.
S

Consumer HDDs have reached 1,000,000x the storage capacity of their their great-great grandfathers released in the early 1980s. It's amazing these thing don't have a higher failure rate as it is. Probably the greatest thing to impact the failure rate(s) of consumer drives is the shipping/handling from the end to production to the end-user.
You must log in or register to reply here.
Share:
Twitter Reddit Pinterest Tumblr WhatsApp Email Link
Top